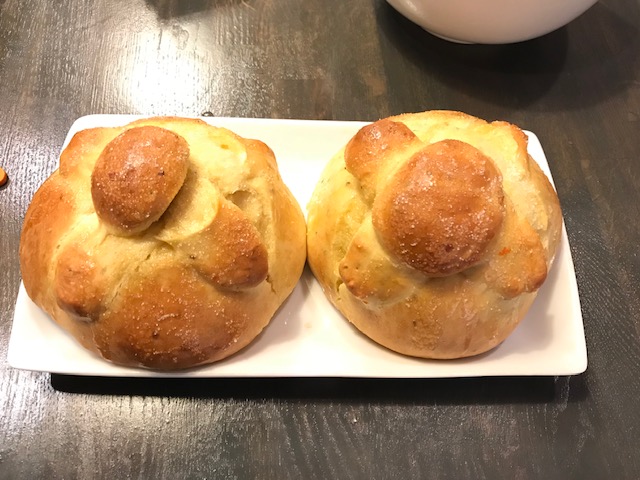 I know it’s the stereotype and all, but even though I’m female I really hate baking. The cutesy aprons, adorable flour tins, and rainbow cupcake scene just ain’t my bag. Give me pastas and sauces and gravies and roasted veggies and spices. No precise measurements needed- that’s where I’m at home! But baking? Sheesh, recipes have varied instructions based on elevations, and a cup isn’t just a cup… it has to be a sifted cup, or a perfectly level cup, or better yet weigh the ingredients… bah. Also, since I have a generalized disdain for aprons and wear mostly dark t-shirts that much loose flour can be an issue.

But I had pan de muertos to make for Dia de los Muertos. And the thought that the dead wait for no one really kept me to a pretty tight timeline here. Pan de Muertos means BREAD OF THE DEAD!!!!! (but without the overwrought punctuation and capitalization). With a name like that I’m sure a sweet bread that’s great with coffee is like, not what you were picturing. Anyway, I had an offrenda to put this on and so had to make it and did, in fact, quasi enjoy it. I did also, in fact, get flour god damn everywhere.

Turn oven on to 325 degrees. Heat milk and butter over medium/low heat till butter melts. Add warm water and a pinch of sugar to a bowl and sprinkle over the yeast to activate it. (Weird bubbling ensues). Zest off the outer peel of an orange with a zester or by carefully slicing and dicing. Once butter is melted into milk remove from heat and let cool a little. In a large bowl add anise seed, 1 cup flour, 2 Tbsp orange zest, sugar, and salt together and then add eggs, yeast, and milk/butter. This is the part where folks would use a stand mixer, but since they sure as hell didn’t have that in 1932 Guanajato Mexico, I mixed by damn hand with a spoon. Here’s the secret though, get that first cup of flour mixed until smooth before adding the rest of the flour slowly until it’s all incorporated.

Once it’s all added together it’s a little sticky and a little shaggy looking. Turn out on a lightly floured counter to knead.

Once the bread is kneaded (5 minutes or so) put back in a lightly greased bowl, cover with plastic wrap, and let rise for 2 hours.

Then once the bread has risen, punch it down and form into loaves. I pulled about 1/4 off and set to the side to do the design on the tops and then divided the remaining dough into two balls. I then made the crossed “bones” and knob on the top (stylized skull? Not sure, but it’s the tradition) by forming it like it was playdough. Then I just pressed them into the top of the balls of dough. (AGAIN, though that’s what I did, maybe form into one big loaf or 3 small ones.) Place on a lightly greased baking sheet, place in the oven, and cook for 20-25 minutes.

While the bread cooks, add the orange juice and sugar to a pot over medium heat and stir to prevent burning. Heat until your glaze is lava.

Once bread is done, remove from oven, drizzle on the glaze, then while still hot sprinkle with white sugar.

It’s tasty, and not too anise-y, which I don’t really like, but this amount isn’t too much. I think Mexicans do anise WAYYYY better than the French do, frankly, so really don’t worry about it- you’ll like it. This bread is great heated up the next day, spread with butter and eaten with coffee. And remember- the dead wait for no one, so like… hurry it up.