It is COLD right now.

END_OF_DOCUMENT_TOKEN_TO_BE_REPLACED

We went out of town for Thanksgiving, which was fun- but a definite high point was getting to go to Mexico for an afternoon with my husband and his brother and my sister in law. (brother and sister in law? Husband’s brother and wife? How to freaking write that out correctly… feel like there is a more succinct way to write that but it escapes me.)

END_OF_DOCUMENT_TOKEN_TO_BE_REPLACED 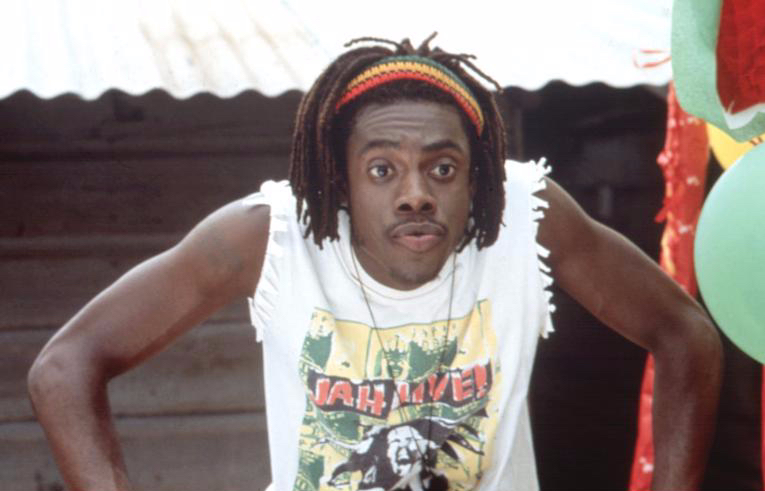 HOW DID IT GO? It Went Like This: *singing* “Some people you know they say they can’t believe, Jamaica we got a bobsled team!”

The craft fair was last weekend and it was, on the scarves, a ROUSING success.

The scarves… 4 to 6 in each color batch

I love that painting… it looks like I have a creativity thought bubble every time I brush my teeth. Here is what the pashminas look like on- this is the one I kept.

I ended up making just under $200 on the scarves, and they went like hotcakes, I think, in part because I priced them to move: $12ea or 2 for $20. I also modeled one all night long, but I’m less sure that contributed to the sales… I was in the pashmina above and shorts, after all. A look right out of the Vogue lookbook it ain’t. I actually have 4 more scarves on order to do another batch for Christmas gifts… because the ones I made for this event are ALL gone!

The girls also did a rousing sale in ornaments, and cleared $65 and $66 ea.

And it being a sip and shop (wine and craft fair) there was lots of tipsy trading at the end of the show amongst the adult vendors so we now have other ornaments and purses and hats… as well as a deer skull adorned with rhinestone brooches which is INSANITY but a small part of me loves. My folks took the toddler home, who was driving me to distraction trying to manage a show and a candied up toddler… and my husband was there to hang out. The older girls were good about managing the table and hanging out.

Just kidding, it’s another post about ice dying and the garden.

So… after the debacle of the last 2 scarves… THIRTY pashminas and scarves and then 20 handkerchiefs showed up… creating a bit of uneasiness on the order of WELL WHAT THE HELL AM I GONNA DO NOW?!

So… first step. Test every scarf with both dye types to see what takes. I chose, since they were open, the black dye for natural fabrics and the turquoise for synthetics. We know the turquoise dye takes like a denim-y blue, so both of those could work with just about anything I subsequently dye with. You see how well reasoned that was? Let’s see how that turned out. 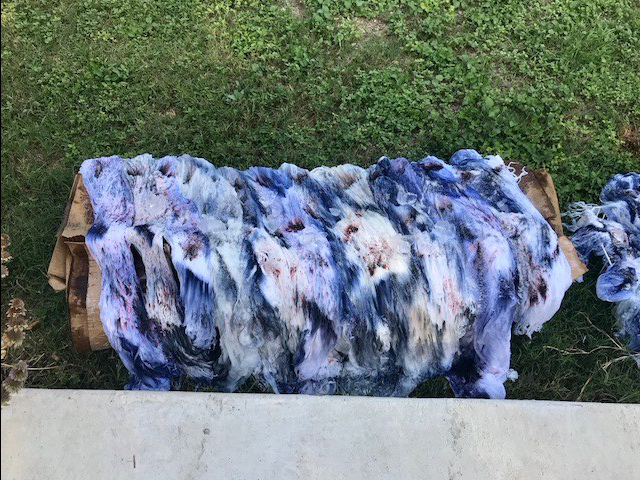 So of course the black dye took as red… because why wouldn’t it really?

But also black… in spots. But red, also red!

But can we all agree the dye took WAY better this time! Like… I can work with that color depth. So I did two things different this time, I used a ton more salt, and also sprinkled soda ash as well. Now, soda ash is SUPPOSED to be mixed in water and the fabric dipped in it before dying… but since it has a warning that it might be FATAL if F-ing swallowed I went ahead and just sprinkled it on the wet scarves (I prewetted them), sprinkled dye over the top, then salted the whole thing, and then added the ice. I will then throw the fatal powder away or give it to the crafty neighbor without kids because that bottle makes me nervous. Please let this shit work out, because I’m already annoyed with the unpredictability of the dyes. Also, I left this trial run sitting overnight instead of just 2 hours. Which… we all knew that needed to happen too.

So now I have 4 scarves out for a second treatment, with brilliant blue (looks purple) olive green (looks pucey) and yellow (looks like brown mustard) so God help me as to what this will look like… they’ll be out there for 24 hours if I can keep my twitchy hands off them.

The garden is burning up in the Texas July… and the woodpeckers have found the big tomatoes. So… it looks like this:

Bobcat I think is done, HM 1823 is close, and Sungold and Sweet 100 are still going strong

Seriously this thing. It’s the Leaning Tower of Pizza-Toppings these days, at least 10′ and growing

The Sweet 100 cherry tomatoes seems to be out producing the Sungold right now, or it may be that the Sungold is easier for the toddler and birds to pick off. While the woodpecker eats the large tomatoes, the mockingbirds keep a pretty steady stream in and out of the sun gold for cherry tomatoes. It’s okay… there are enough to share. 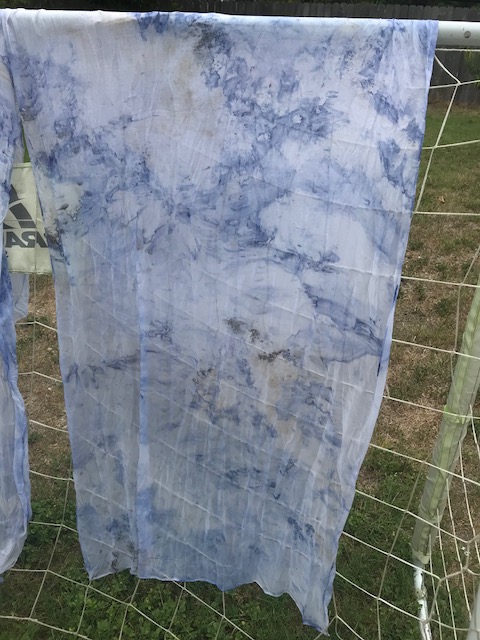 We live in a sweet, sweet neighborhood. Old homes, old trees, and mostly old(er) retired residents. We’re like the adopted pets on our street: young (ish) parents and three young kids. On top of the fact that we have plenty of watchful eyes overlooking the girls as they play outside (in a benevolent way of course) or ride to school, they’re also all quite cool. There is the potter down the street, the retired female electrical engineer who sews and reworks antiques, the retired airplane trainers (couple) who sew and paint and cook, there are authors and gardeners… you name it. They’re also all really indulgent with the 9 year old for her flower selling business- I’m SURE you can picture how well that goes down around here! She has to alternate where she starts because she sells out before she can get to even four houses EVERY. SINGLE. TIME.

And a couple of times a year we have neighborhood parties. A year ago at a party we all realized there are a lot of artists and crafts folks around, so we decided to have a craft show before Christmas, with a pre-sale invite only wine party the night before. I didn’t have anything, but helped the older girls with their wildflower seeds and acorn crafts. (pom poms glued in acorn caps and made into Christmas ornaments and garlands) They, of course, cleaned up.

We all had so much fun, and honestly it was a really successful show. We’re going to do it again this year… and I’m INTENT on participating this time.

But what to make? I was going to paint… but the second I do it for profit my talent shrivels up into a wadded up ball in the corner… so that’s out. So this year I’m trying scarves. I have a complete and total scarf addiction, so I figured if I did what I loved I couldn’t really go wrong. Sell a craft you’re a total novice at? Why the hell not! Now, I really am not a fan of tie dye, but the process of dying stuff intrigued me, so i tried ice dying.

Shot of the finished product!

Or… kinda. So the ACTUAL technique for ice dying is you completely cover the fabric with ice or snow, sprinkle dry dye powder on top, and as it melts it pulls the dye into the fabric. The way I did it is a hybrid of ice dying and speckle dying. (dusting dye powder straight onto fabric.)

First I washed the two polyester/cotton blend scarves I bought on Amazon with dishsoap and rinsed them out well. I wrung them out so they were wet but not sopping.

Second I put them in an old dish rack placed on top of a large piece of cardboard on the grass at the back of the yard. I then sprinkled the scarves with dry powder. A little goes a LONG way.

Then I sprinkled some rock salt (supposed to help fix the dye) and some sodium alginate in spots. The sodium alginate is food grade (makes those gel like balls of liquid) and I’d read it can make more concentrated colors when dying) 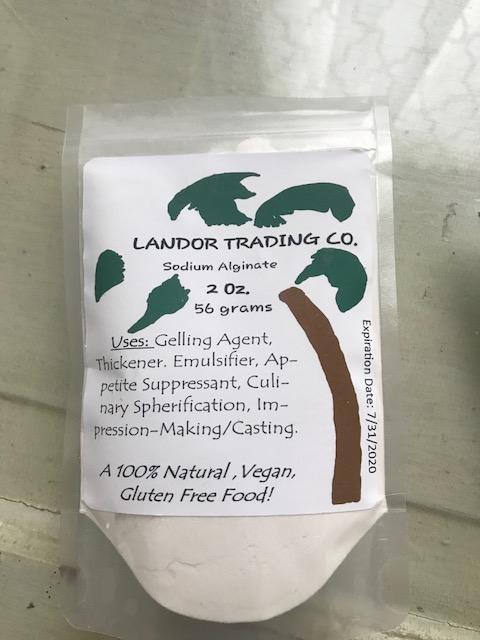 Appetite Suppressant? What the hell

On top of all of it all I then dotted around some ice because we didn’t have a ton and the dye onto the wet scarf was kinda making a cool pattern without it.

Super high tech, as you can see

I then resolved to let it sit out there all day… which means of course that I rinsed it out after 2 hours of waiting that almost killed me.

I am super thrilled with the results! There will be no soccer for a while, methinks

So… how’d it work out? So the ONLY places the tan and black dye took on the scarves is where there was a concentration of salt- so that’s good to know. I’m not sure what percentage cotton to polyester the scarves are, but the black and tan dyes are not supposed to work at all on poly fabrics, so good to know I can hedge my bets there. And weirdly they are a really denim-y blue… even though the poly dye was supposed to be turquoise.

The sodium alginate gelling agent didn’t work AT ALL, and took some light scrubbing to wash off… but when I did get it off it took all the dye with it. I’ll try it again on a cotton or silk scarf, but I’m not holding my breathe on that one.

So, after my initial success I bought 30 scarves for $0.99 each on Thredup clearance with an extra 4th of July coupon… so $0.80 each and $5.95 shipping. And bought another $25 worth of poly dye. Since I’m buying so many scarves second hand I won’t know fiber content, so I’ll do like I did this time and go heavy on the salt and use both kinds of dye every time. And then I bough like 20 cotton bandanas on Ebay… lord help me to sell more than 1 of these things at the show…

I’ll need some more dish racks as well. I COULD just do it on the grass, but I don’t want them sitting in a puddle of dye, I want that more marblesque effect so the dye needs to drain off freely. I’ll hit up some thrift stores for those.

And I should really break down the cost here:

$16 on 2 poly blend scarves from Amazon

$30 for 30 scarves (similar to ones from Amazon and pashminas, about half and half)

Salt, had on hand

$8 for worthless Sodium Alginate. Nothing ventured, nothing…

So… that’s $131 when i’m supposed to be saving money. Takes money to make money though… right? That’s the ticket.