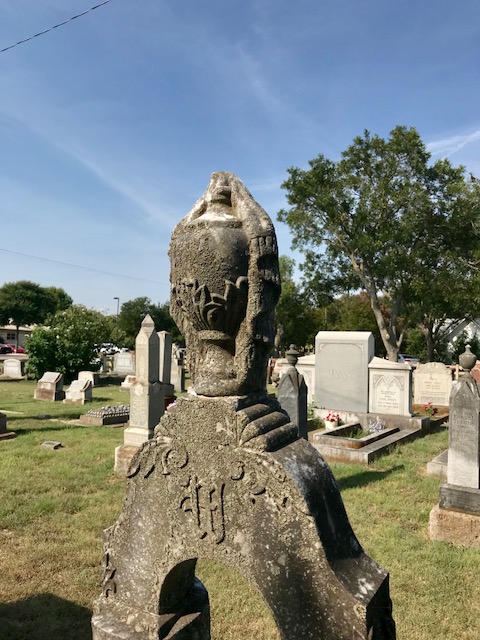 I was out on a construction site for work today next to the police station in Cibolo, TX… and there was an old cemetery across the street that looked beyond intriguing. I’ve discussed my love of old graveyards before here.

I wrote on that previous post about the peace of graveyards, and how time kinda removes the grief from death… but it wasn’t how I felt this morning. God, there were just so many children… parental loss and it’s screaming anguish was still so upfront in this graveyard.

The symbolism though… the lamb, the tree cut down too soon…

Or this one, that was excruciating to imagine those parents who lost their 2 and 3 year old daughters two days apart in 1890. What sickness was in the house… what grief those poor people endured. It still hung heavy in the air around this dual grave:

The ratio of children to adults was much too high for a normal (I use that phrase loosely), more enjoyable stroll around a graveyard. But there was still the normal interesting things that are what I like. (said the crazy person…)

I always knew tree trunks were Woodsman of the World headstones… but turns out why there are so many of them is interesting. They were free with W.O.W. life insurance policies! And the Germans would be damned if they were going to pass up a sweet deal like that! Hence SO many tree stump headstones! A tall trunk is for adults, short logs are for children… not sure if the 2 cut logs the larger trunk is astride means they lost two children or just that they sprang for the more expensive policy package.

No one is REALLY sure why there are so many cemented in sea shell covered graves in the South… many of them far away from the ocean. Loose, non cemented in shells (often conch shells like the two closest to the headstone on the picture above) generally mean someone took a pilgrimage and brought it to the grave long after burial. (European symbolism there of a pilgrimage). Slaves often marked graves with shells because the ocean brought them to this place, and so the shells symbolized taking them to their final home. Perhaps these German immigrants used them for the same symbolism? My favorite theory (though I don’t think it’s right) is that shells were used s shingles on grave surfaces as a protective “roof”… so totally utilitarian. And while that DOES sound very 1800s German it doesn’t quite jive because the rest of the graves are so ornate. Shells have generalized Christian symbolism… we may just have to leave it at that and that it was just a Victorian fad.

The urn was a symbol of death long after cremation went out of fashion, and the shroud symbolized variously: the last curtain between life and death, or protection, or that death has fallen over something. I’ve seen shrouded angels (fucking terrifying, lemme tell ya), shrouded fruit baskets, shrouded obelisks and urns… there were some pretty talented stone carvers back in the day. It’s one of my favorite things to look for in cemeteries, the shrouded statuary.

And then there are the hands. The hand like that is SUPPOSED to be pointing up to heaven and God, but which always look like a shaking finger like “Oh you! You got me! Never saw that one coming, I didn’t!”

Next there are these, my VERY favorite things- enamel pictures from the 1800s. The glimpses of people… generally in the prime of their lives even if they lived to be old… which I LOVE. I HATE modern obituaries that only have the pictures from the very end of life… I love seeing people from another age, in their prime, looking out at the world like this! Now, as much as I love graveyards, I never wanted to be IN one before. Cremate me and cast me in the Frio River in Uvalde… but I’m tempted by the chance to be one of these for the next few centuries…

And inscriptions… There was one that read Asleep In Jesus from 1915 for a 25 year old dude. Which is just weird and I hope just the result of iffy English skills. Or this one:

It reads, or as damn close as Google Translate can get me, “The silent grave is unafraid of the Devil, because of faith in God and no fear of Judgement.” Well okay then.

I guess I love old cemeteries for the same reason as I like older neighborhoods and not the cookie cutter new developments. Variability! Individuality! Craftmanship! Interesting Things!

Here’s the thing, every once in a while I think like, huh. So THAT’S how I turned out, to be someone who likes old cemeteries. Who would have known when I was younger that I’d grow up to be that? Wonder if quilters or giant pumpkin growers or people who collect typewriters ever wonder the same thing?

Linking up with Samantha at Fake Fabulous HERE- check it out!

2 thoughts on “Of Grave Importance”